The Evil Storyteller and Me

When I was about eight, my dad wrote a short chapter book called "The Mystery of the Evil Storyteller." It's a story of children who mysteriously disappear during the library's story times when a certain dazzling woman reads. He fictionalized our family in this children's book, using my sister and me as the main characters, and himself and our mom as our in-the-book parents. My cousin and her father are in the story, too, and my dad's childhood friend even pops in as the police chief. The character versions of my sister and I use our clever reasoning skills and thinking caps to gather clues that solve the mystery and bring back the missing children.

If I've read it before, I don't remember. Like my own manuscripts, my dad's is yet to be published--he had forwarded it to me for feedback, to see if it was worth dusting off, revising, and trying to get published (it is).

I was blown away by how fun it was to have myself frozen in time as a child with my sister in a book. There I was, a clue-seeking, pigtail-sporting little sister! Katie-the-character was afraid of being kidnapped but too interested in solving the mystery to worry about it too much. My serious big sister was in there, too, with her big sister way of telling the best way to go about figuring things out.

What fun to go back in time like this! But it was more than a little sad, too.

After finishing the last page of my dad's book and getting that last glimpse of what my family was like back, I felt sobered. When I was eight, my parents were married, and my father included in his book many of my mom's little idiosyncrasies, funny things only she would do that I forgot he once knew. His character in the book called her "Kath" instead of her full name, teased her just like he did when I was a kid, when we were a family under one roof. The character versions of myself and my sister interacted with our parents naturally, addressing both of them together sometimes, and thought nothing of it.

Even though they were married for twenty-two years, legally divorcing one month after my eighteenth birthday, those years seem like a closed storybook. There's a part of me that does not fully believe those years existed, those memories really created. It's funny how a relationship that was once all I knew, once so very real can seem like it never happened after enough time has passed. Time dusts over the strong feelings and true beliefs that once existed with strong certainty.  I'm not sure if that's a good thing or a bad thing. I guess it just is.
Posted by Book Mama at 7:43 AM 5 comments:

How Do You Get There?

Over the weekend my critique group pal and I drove up to Buckeystown, Maryland, for a SCBWI* Regional Conference.  We're aspiring children's book writers, though she's a giant leap closer to that goal than I am. Arbordale purchased her manuscript last year; it will be published next Spring.  (How cool is that?!) Hoping to learn a little more about publishing our precious words and to learn shortcuts around the infamous slush piles** in publishing houses, we signed up for this conference.

The conference was close enough to allow us to drive up and back each day, rescuing our husbands from certain peril and the prospect of bed-timing our respective children by himself. Sherryn drove the first day, I drove the second.

On the first day, we took the major highways--the treacherous Beltway and always trafficky I-66. There were a ton of other cars on the road, in a rush to beat us to the next exit. As we either zoomed or inched along (there was never an in-between), we chatted about hopes and dreams like school girls, and then how to fit those hopes and dreams into our busy adult lives. We arrived at the conference early, ready to soak up every nugget offered, and ready to pimp our manuscript should the opportunity arise.

On the second day, I took a wrong turn practically out of the parking lot. I headed the wrong way on I-66. Luckily we realized it quickly and my handy dandy GPS showed us that this wrong turn was just fine; we could take this path, too. 15 North was a small backroad that wound around farms and antique stores, and across the Potomac on a picturesque old bridge. We arrived at the conference, albeit a totally different way.

Those two drives on those two days provided a refreshing reminder of the multiple paths that exist to get to the same goal. It's all about having faith and believing that you will indeed get there. Wherever "there" is for you.


* Society of Children's Book Writers and Illustrators.  www.scbwi.org if you're curious

** A slush pile is the giant pile of unsolicited manuscripts that sit, their pages crossed, hoping to be read and accepted, in the office of an agent or editor.
Posted by Book Mama at 2:26 AM 4 comments: 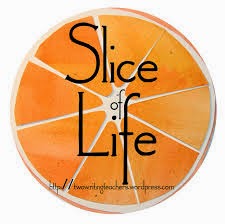 I just returned from a long weekend away where my three kids and my sister's four kids all hung out in a camp-like setting.  Needless to say, it was a whole lot of fun, and hanging around with all those kids made me, at times, feel like a kid.  Bungee-trampoline jumping, putt putt playing, looking-for-bears hiking, marshmallow toasting, swimmin' hole swimming, tall tree climbing...plus a whole lot of time just hanging out.

During those little adventures and hours of hanging out, one or two children were sure to have an outburst of tears. For example:

My sister reprimanded Lorelei that climbing a tree needed to be done without help; Lorelei cried when her aunt took away the pile of logs that she was dangerously assisting her to get up and down a tall pine.

D's patience with the rope swing at the river was, um, severely limited at times; he had to sit out a turn (the peaceful, natural setting soon had screams of anger as well as cool water running through it).

A craft that J had been working on in our cabin had been taken apart; she whined "It's not fair!" and had to start over and lose 15 minutes and a handful of beads to Ben, who thought (incorrectly) she wasn't interested in her project anymore.

At one point or another, all of the kids suffered some sort of disappointment. And that sense of disappointment touched them deeply in a kid way--they HAD to respond, noisily, with tears and sorrow because the frustration wouldn't stay inside their little bodies.

It made me realize, watching these loud bursts of painful disappointments, how each and every child DID get over it.  These little disappointments, which feel anything but little to them, are like training for the bigger disappointments they'll sadly but inevitably face in the decades to come.  Hopefully they'll see the pattern: something happens I didn't expect, I cry about it, I take a deep breath and redo the situation, I get over it.

As an adult, I had two big thoughts: First, I think that I should--we all should--let out the burst of feeling when something disappointing happens to us.  Cry! Scream at the river! Yell "It's not fair!" as if you believe that life is actually fair.  This release-of-feeling part of the process sure was loud and messy, but I think it actually helped the kids tell anyone and everyone that THEY WERE HURT! Why do we adults often keep it all in, putting on a brave face and gulping down our feelings?

Hanging out with kids is always a good thing--there is so much to learn from them!  (But, as summer ends and school begins, I look forward to the quieter hours of reflection that I have without them when they are in their teachers' capable hands...!)
Posted by Book Mama at 2:49 AM No comments: