Working Through a Mood

My youngest son, Kiefer, has a sunny personality. He charms everyone he meets with his precocious words delivered through his toothless lisp and slightly mischievous expression. His teachers report he's a joy to have in the classroom; his coaches nod in approval at his hard work and hustle and good attitude on a field or court.

But the past two afternoons when I've picked him up from school, he's been nothing like his usual self. He's been a storm cloud of a child, complaining of the after school snack, crying about being dragged to whatever activity we've got scheduled that day, and falling apart if one tiny thing goes awry. I think he's got a little cold, I think he's going through a growth spurt so is hungrier than usual, I think he's just five years old.

I'm not sure which day was worse--Tuesday or yesterday--but yesterday we at least came home after school. A nice treat in our baseball-filled schedule! But getting yesterday what he wanted on Tuesday did not soften or brighten Kiefer's mood. Nope. He was a total grumpus. He didn't want to paint with his siblings and neighbors. But when he finally did, and when his big sister accidentally touched him with the tip of her brush, he ran to his room in hysterics. He didn't want to go outside to play, nor did he want to do extra chores to earn money for a baseball backpack his big brother just bought for himself. He didn't want to play with the puppy or build with Legos. He didn't want to read books or do something with stickers.

It sure seemed all he wanted to do was bug the bejeezus out of me.

But then I started making dinner. Out of my three helpful kids, Kiefer is the most helpful in kitchen. I showed him the balls of pasta dough I mixed earlier that were resting on the countertop. All by himself, he got out and clamped the pasta machine onto the counter and sprinkled flour over the dough balls.

We had six little rolled of pasta and he insisted on cranking out all of them. That means he cranked each of the rolls four different times, making the long strips of pasta thinner and thinner with each crank. The first run through the machine is seriously hard work, but he grunted "I can do it" as he cranked. And he could! He laughed at how long they became, marveled how one twisted itself inside the pasta machine and became "L-shaped," and loved sprinkling flour on each pasta after it was rolled out. I asked my daughter Lorelei to come take a picture of us, working together to make dinner: 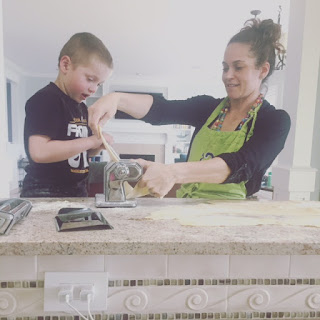 By the time the pasta and accompanying meatballs were cooked, Kiefer was a different child. By doing something important. He and I watched humble dough balls transform into pasta and created a nourishing dinner for his family. This made something inside Kiefer relax a little, soften a bit.

There's some magic in every mother's kitchen, and there's no doubt in my mind that I witnessed some in mine last night. After an hour of grumpy, frustrated back-and-forth conversation between me and my son, we came together as a team to make food from scratch. And then, we sat down together and ate it.
Posted by Book Mama at 5:52 AM

Love this slice. Sometimes our kids know what they need better than we do. Glad this worked out and you got a yummy dinner!

How very sweet - and what precious memories you are making! Most kids need to contribute in a meaningful manner and to be told they're appreciated for this! (My own kids loved when we got the pasta machine out! Great memories here, too.)

It's such a sweet sentiment that your son just needed to do something important that made him feel important. I'm noticing this grumpiness from A LOT of children right now. Your post made me feel like I should plan some things that are out of the ordinary to break up some of the bad moods. Great photo!